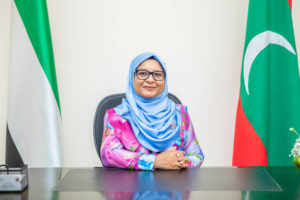 Ambassador Shabeena’s contribution to the Foreign Service as a diplomat based in a Diplomatic Mission of the Republic of Maldives began with the Permanent Mission of the Maldives to the United Nations in New York (2006 – 2007), followed by the Embassy of the Republic of Maldives in Beijing, China; where she worked in the establishment and opening of the Mission in 2007. After Beijing, Ambassador Shabeena’s next diplomatic postings were in New Delhi, India (2014 – 2015 & 2018 – 2020). During both her postings in China and India (2014), Ambassador Shabeena was promoted from Second Secretary to First Secretary and Counsellor to Minister-Counsellor, respectively. She was the Deputy Chief of Mission at both Diplomatic Missions of the Republic of Maldives, in China and India, where she was in charge of the bilateral relations, administration and finance sections.

Prior to her appointment, Ambassador Shabeena was fulfilling her second posting in New Delhi as the Acting High Commissioner, where she was posted as Minister (Deputy Chief of Mission) since the current Government came to power in November 2018, when the Maldives – India relations began elevating.